It started with a dress.

In the fall of 2018, while trying on a dress for a wedding, I remember feeling like the fabric was pressing on a bad sunburn on the back of my legs. Thinking I had a rash, I went to a dermatologist who found nothing. The weeks passed. The months passed. The odyssey began. Seeing as I already have cerebral palsy (CP), complaining of leg pain in my case seemed fairly unremarkable to most doctors.

Slowly, casually, it was implied that perhaps it was all in my mind.

I knew this wasn’t just CP. The doctor list grew. The frustration grew. The pain ripped through my skin, to the point where putting on a pair of pants felt like fire. Every transition between sitting and standing became taxing, like an awful pain lightning. Getting on the toilet and off the toilet became a chore.

And harder still, the fact that this “invisible sunburn” gripping my body had no name, but cast itself over everything at once.

It rewires you, a silent puppeteer that dictates your movements, if there are any movements at all. It makes the place that has always housed your soul feel unfamiliar, strange.

The body I now lived in felt like it no longer belonged to me. At the same time, the steady beat of my heart reminded me that I was still here, still me, and if getting out of bed was all I could do, that was enough.

With every failed appointment, every “never seen this before…” I grew more and more dejected, uncertain if I should even believe myself about this nameless fury dancing through my nerves.

And I’d choose one, knowing full well that none of them represent the feeling of being burned from the inside out.

Knowing full well that squishing my untamed pain under one of these cookie-cutter labels is one of the rules.

Chronic pain is quick to teach you the rules.

Perform your pain clearly enough that men in white coats see you as worthy of their help.

Show your pain, but not too much, or they will call you “hysterical,” “dramatic,” even if they only use those words inside their own heads.

The rules require a sweet smile, to ward off the “just think positive!” folks. But don’t smile so much that the men in white coats can decide you “don’t look like a person in pain!”

I wish I could tell them that a person in pain may look like themselves, sound like themselves, “have such a pretty smile!” and still want to curl into ball amid what feels like the wreckage of a former self.

The truth is, the pain storm is constant, but you learn its choreography. Because there are still dogs to be walked. Emails to be answered. Texts to be sent. The cruel reality and the splendid miracle of it all is that life ticks forward even when it feels like the pain may consume you.

When I neared two years since the onset of the mystery pain, I finally convinced a doctor to look at my spine.

When the MRI came back, there it was. March 9, 2020. On my sacral nerve roots were a series of neural cysts… that no one had ever heard of.

My initial thought, like many others, was what the ever-loving f*ck is a Tarlov cyst?

Put simply, a Tarlov cyst is a sac of fluid that presses on a nerve root and makes it scream. Some folks with Tarlov cysts have no symptoms at all.

Others have debilitating symptoms ranging from burning, stinging, and limb weakness to pelvic pain, urinary and bowel issues. I fell in the latter category and was just beginning to understand the magnitude of my challenge with a devastating disorder that isn’t even on most people’s medical radar.

I quickly learned that many surgeons don’t believe that Tarlov cysts can be symptomatic, if they acknowledge the cysts at all. It was vindicating and validating to have a name for the “invisible sunburn” after nearly two full years of insisting that something was very wrong.

At the same time, it was terrifying to ask “what next?” in the face of a poorly understood disorder that sent lightning through my legs and was evidently unrelated to my CP.

All the while, I couldn’t shake the feeling that if I were a super athlete who suddenly doubled over in pain, my symptoms would have been taken seriously. Instead, I had been too often dismissed, as if my pain as a disabled woman were just a matter of course.

It seems that disabled folks, especially women, are expected to simply accept their physical pain, because “well, you’re in a wheelchair anyway.” That unspoken but ever-present sentiment hurt nearly as much as the zips of fire that pinged off my skin like the signal off an overzealous cell tower.

I was fortunate enough to have surgery last October in Sacramento, CA with one of the two surgeons in the United States trained in Tarlov cyst removal. I am fully aware of my tremendous privilege and dream of a world where others who suffer from this disorder can quickly get help.

Six months onward, healing is not a linear process. It’s more of a dizzying zig zag. The physical scars of the surgery run through my flesh—but more difficult are the unseen wounds from medical trauma, gaslighting, and the feeling of being a stranger inside myself.

My old spastic, but fairly free movements are gone, replaced with careful, measured steps. Getting out of bed is a lengthy and cautious routine of moving a once unified being part by part as not to perturb my still-frazzled nerves.

I live with the ghosts of past pain episodes; they show up uninvited in the form of involuntary gasps when I move in a way that once hurt. I equally live with the fear that old pain ghosts will come back to life and snatch my hard-won healing. That they will sneak up behind me and show me a true “10” on that infamous pain scale.

I feel tremendously better, stronger, and more grateful each day for the opportunity to learn my body’s new rhythm.

Still, I am grieving and I think a part of me always will be. Living with a disability, I’ve learned, is a series of rebirths, as wear and tear and achy joints and funny- named cysts no one knows about make irrevocable marks on my earthly dwelling.

Hiraeth is a Welsh concept of “longing for a home to which you cannot return.” I find myself filled with a kind of body hiraeth, a longing to return to a body that takes springier steps, one that doesn’t wince while swinging into bed, one that doesn’t have 6 plates and 12 screws coursing through a fixer- upper spine.

I wrestle daily with the struggle to reconcile two contradicting truths. I feel both betrayed by a deteriorated body and utterly in awe of its strength.

No platitudes can lessen the sting of what I’ve lost, but no loss can diminish the wonder of this body’s resilience.

Grief and joy can live in the same house. And most times, they do.

I long for a body, a home, to which I can never return…and yet, I listen to the beat of my heart and I know that I never left that body at all. It is changed… but it is still here… and so am I. 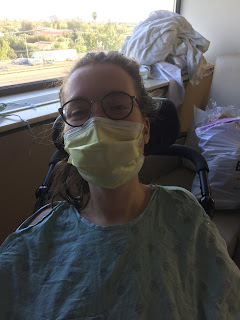 Image: Me smiling in a mask and hospital gown, seated in a wheelchair

Posted by The Squeaky Wheelchair at 8:18 PM