Spotlight on "Social Fitness:" A film by Anna Pakman

Over the past year, we’ve all had to adjust to “the quarantine life.” The snacks we left in our now abandoned offices are on their way to becoming ancient ruins. We’ve nearly forgotten about this strange concept called “pants.” We’ve adapted to acting like we are allergic to other humans. Quite simply, since COVID-19 changed everything last March, we are in an alternate…Zoomiverse.

With our lives changed beyond comprehension and our hands raw from Purell, this situation has brought to mind an old saying for when things get absurd—“we may as well laugh or we’d cry.”

New York City based filmmaker and digital marketing executive, Anna Pakman, is choosing to laugh. Her upcoming film “Social Fitness” puts a humorous spin on the prospect of adjusting back to “normal” life as the pandemic begins to show signs of easing and explores the hallmarks of pandemic culture, from awkward Zoom weddings to the widespread abandonment of concern about our outfits, through an uplifting and witty comedic lens.

“Social Fitness” was created as part of the Easterseals Disability Film Challenge. Founded by disabled actor Nic Novicki in 2014, the challenge provides a platform for new voices in the film industry and strives to amplify diverse narratives around disability. Pakman is excited and thankful that Easterseals is paving the way for her and other disabled professionals.

Both Zayid and Pakman have cerebral palsy and they are joined by a talented and diverse cast including performers with a range of disabilities such as autism, multiple sclerosis, PTSD, osteogenesis imperfecta, and ADHD, among others. Seven of ten people you see in the film have disabilities, while the rest are non-disabled allies.

For Pakman, the inclusion of people with disabilities in front of and behind the camera is personal. When asked why disability representation matters so much in her work, she recalls growing up in the 1990s and early 2000s, wondering why no one on TV or in movies “looked like her.”

However, make no mistake, Pakman is emphatic in reminding audiences that performers with disabilities should not only be featured in media about disability, but instead, in all types of media, in all capacities. She states, “People with disabilities can play any role, in front of or behind the camera.”

However, the industry has been slow to recognize the talent of the disability community. Pakman spoke of a recent study by the Ruderman Family Foundation which found that despite being about 20% of the population, only about 2% of primetime characters are disabled, and of those, only 5% are played by disabled actors.

The practice of casting non-disabled actors in roles written for a disabled character, sometimes called “cripping up” has caused controversy in the community, most recently with the casting of the non-autistic actress Maddie Ziegler in the title role of Sia’s Music, about a young autistic woman, a casting decision Pakman calls “so offensive.”

So-called cripping up has real consequences for performers with disabilities looking to enter the notoriously competitive industry. Pakman says, “when someone who is not disabled is cast in one of the very very few roles actually written for people with disabilities, you deny the opportunity of employment to an actor with a disability.”

Pakman points to the markedly lower employment rate of people with disabilities, which stands at about 31% and has been significantly impacted by the COVID-19 pandemic. Real representation, however, has industry-wide benefits beyond providing jobs to disabled employers. More importantly, Pakman asserts, the casting of disabled performers creates more authentic material that is more enjoyable for all.

When naysayers challenge that notion, claiming that disabled actors won’t be marketable, Pakman, no pun intended, doesn’t buy it. She stresses that audiences gravitate towards authentic portrayals and those who don’t believe that they will sell tickets are underestimating the public’s appreciation for real, human stories. She cites the accomplishments of Oscar-winning Marlee Matlin in Children of a Lesser God, a film she argues would not have been nearly as successful if Matlin’s role had not been played by a Deaf woman. Given a pipeline, she says, performers with disabilities are more than capable of working among Hollywood greats. Also coming to mind, she says, is actress Ali Stroker, who won a Tony award for her 2019 performance in Oklahoma! and has since become a household name.

Although Pakman and her team are passionate about disability in film, “Social Fitness,” she says, is not just a “disability film.” The project is meant to highlight the universal struggles of the pandemic, and was created with the hope that all people can find a relatable moment in this tale of… wait for it…these unprecedented times. Of her characters, she says, “they are just regular people, who happen to have disabilities, dealing with regular things” from cat obsessions to our collective hesitation to wear anything but sweatpants ever again. “Social Fitness” defies the trope of disabled folks being inspirational for leaving the house. However, Pakman jokes, in these corona times, anyone leaving the house, especially in (gasp) jeans, “kind of is an inspiration.”

Although Pakman and her powerhouse cast hope to bring some levity to the situation, she acknowledges that not everything about the pandemic has been sunshine and roses. She describes her own moments of depression, as well as her own fears about medical rationing endangering people with disabilities in a system that does not value our lives. She is “grateful to have the basics: a home, food to eat,” knowing that many have “suffered much more” in the past year. Given the many immensely painful aspects of the COVID-19 pandemic, the quirky, spirited, and delightfully snarky “Social Fitness” aims to deliver the laugh ‘til you snort break so many are craving.

While it can be difficult to imagine anything positive about this challenging era, the cast and crew felt excited about the ways in which the pandemic allowed them to try new filmmaking techniques. The film was largely shot on cellphones, which Pakman states now deliver “cinematic quality footage” in a handheld device. The learning curve of making a film in quarantine forced new levels of creativity and highlighted just how essential strong communication is in making a successful project. Quick thinking— and you guessed it—Zoom, enabled collaboration between folks from New York to Los Angeles and Florida. In many ways, a cast and crew of majority disabled people was uniquely prepared for this moment. For people with disabilities, adaptability and innovation are inherent given the constant need to problem-solve and to navigate a less than accessible world.

With light-hearted quips about emerging from our Zoom caves, “Social Fitness” hints at the end of corona captivity. However, Pakman warns, the pandemic is still very real and she hopes audiences will come away understanding the importance of mitigation measures like masks and social distancing.

She also hopes that the project will encourage the inclusion of disabled folks in the industry and provide more opportunities for her actors. Says Anna, “I’m hoping that when people see someone with a disability, they judge them solely based on their talent and what they say they are capable of.’”

To those who are hesitant to welcome performers with disabilities on the stage and the screen, she has a warning: “You will miss out on a lot of talent!”

Don’t worry; your cat, your homegrown basil, and your sourdough bread are all cordially invited. 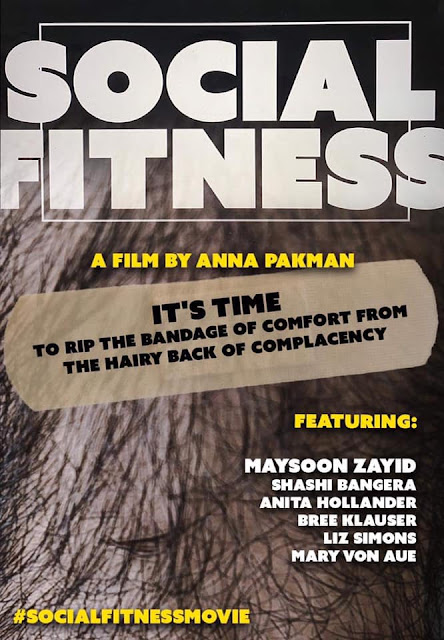 Image: Social Fitness: A film by Anna Pakman. An image of a bandage and the text "It's time to rip the bandage of comfort off the hairy back of complacency." Featuring Maysoon Zayid, Shashi Bangera, Anita Hollander, Bree Klauser, Liz Simons, Mary Von Aue. #SocialFitnessMovie
Posted by The Squeaky Wheelchair at 2:02 PM