New Year's Eve Makes Me Sad (But I Like the Snacks)

I’ve always found New Year’s Eve to be very sad. It breaks my heart and feels so strange to think about starting an entirely new year without the people we’ve lost; kind of like we’re continuing some weird journey while a bunch of people we love are waving as we look out the rear window, as if to say “I gotta stay here.” I imagine them getting smaller and smaller as I move forward, like when I would leave my grandparents house as a child. My grandparents would line up on the driveway, waving, waving as the car pulled away until they were just dots on the horizon.

There’s a cruelty to it, writing a year on a page that people you love won’t, adding to that unwanted collection of years in which they are nowhere in the world. Nowhere and everywhere and nowhere all at once.

The thought of more time and space coming between us, so formally marked by a turned page, has always stirred a certain melancholy in me and a wish that I had studied the fine details of their faces for longer, taken more pictures, been able to do that lunch date we hoped for “when things get better.” We all, I suspect, have some unfinished plans with the people we’ve lost, and no platitudes like “they lived a good long life” can truly soften the blow. Of course, there is also the brutal truth that so many lives should have been much longer.

I don’t think I will ever fully escape the New Year’s Eve feeling that I am leaving someone behind when the hands of time cross over the bridge of midnight. The folks waving as the car pulls away will never be “here” again in the way that I want or wish.

Yet I know we never truly leave or lose people we love. The way we hold onto them now is different. I won’t try to tell you it’s just as good. But the fact is that we hold them still, and no clock inching forward or popped champagne bottles or midnight kisses can change that.

To all my beloveds who have “hopped out of the car” this year and each year before that, I will always grieve for you. Part of me will always look for you in the grocery store, hope it’s you when the phone rings, yearn for the feeling of your hands. But since you can’t walk with me into this new year, I will carry you.

And everywhere I go, I will share the joy that was you.

Always will be you.

And I will shout into the wind that you were real.

You were real and you loved me. 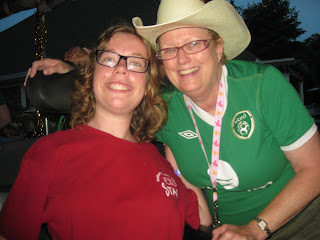 Merry Christmas, Happy Hanukkah, Happy Festivus! I hope you enjoy this year's round of cartoons! Image description under each drawing. 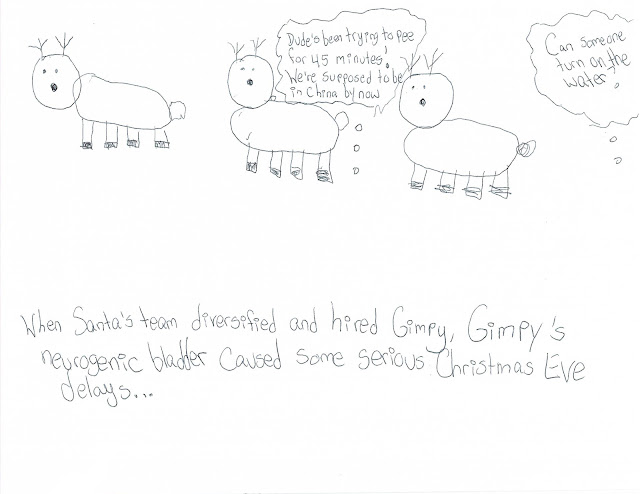 Image: Three reindeer lined up beside each other with one saying, “Dude’s been trying to pee for 45 minutes. We’re supposed to be in China now!” A speech bubble from a voice out of view says, “Can someone turn on the water?” 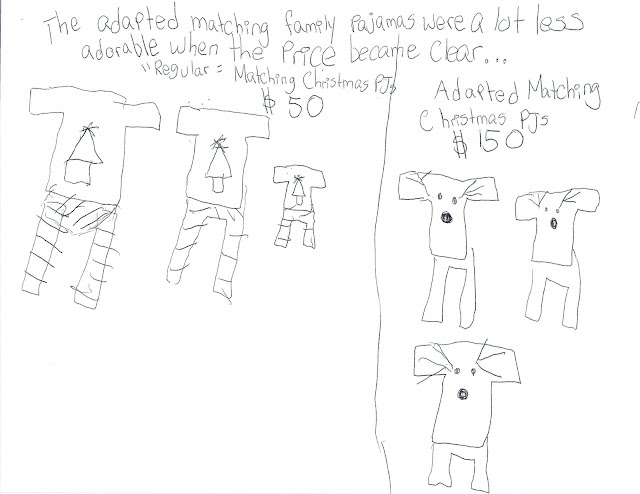 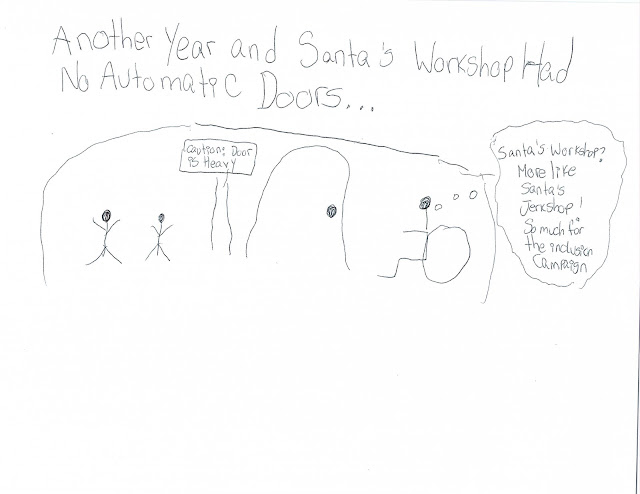 Another Year and Santa’s Workshop Had No Automatic Doors

Image: Two standing stick figures and a wheelie stick figure near a large door and a sign reading, “Caution: door is heavy.” The wheelchair user states, “Santa’s Workshop? More like Santa’s Jerkshop! So much for the inclusion campaign!” 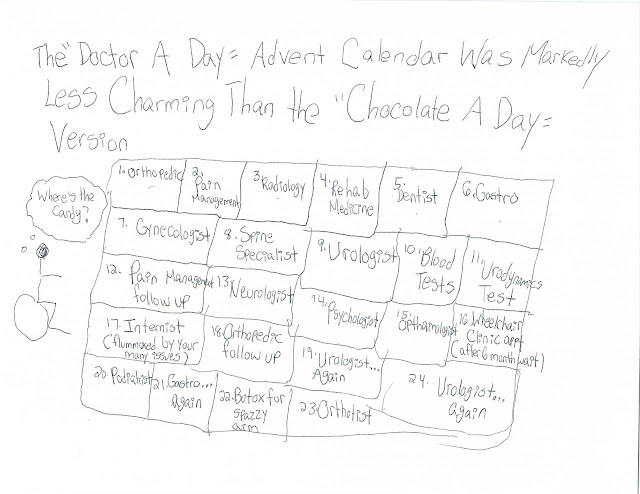 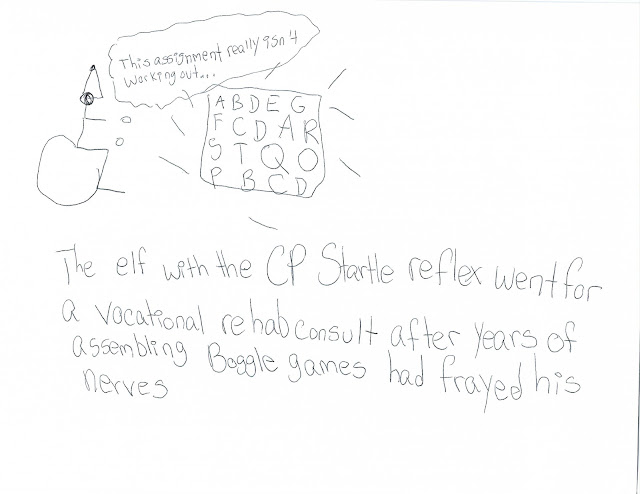 Image: A stick figure in a wheelchair wearing an elf hat sits by a Boggle game represented by letters with motion lines. The person states, “This assignment really isn’t working out.” 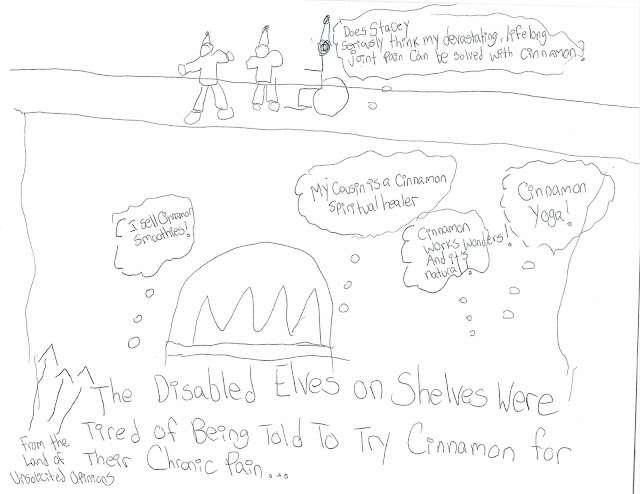 Image: Two ambulatory figures in elf outfits sit on a mantle beside an elf in a wheelchair. Various speech bubbles are shown drifting from “The Land of Unsolicited Opinions” such as “Cinnamon yoga!” “Cinnamon works wonders! And it’s natural!” “I sell cinnamon smoothies!” and “My cousin is a cinnamon spiritual healer!” The wheelchair user muses aloud: “Does Stacey seriously think my devastating, lifelong joint pain can be solved with cinnamon?”

*In Elf on the Shelf lore, cinnamon is considered like vitamins for elves 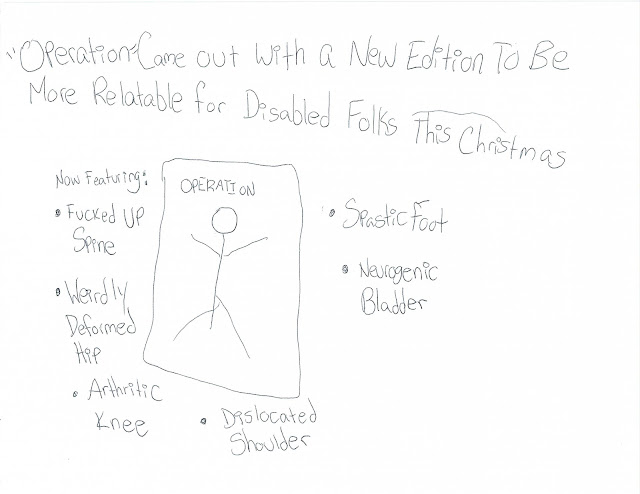 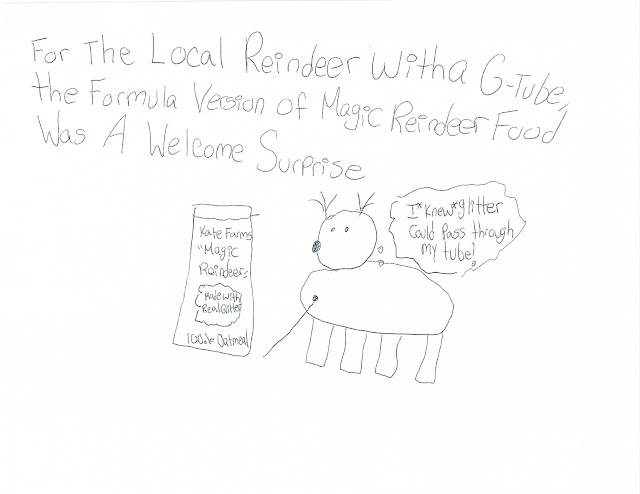 For the Local Reindeer With a G-Tube, The Formula Version of Magic Reindeer Food Was A Welcome Surprise

Image: A reindeer with a tube in its belly next to a can of formula that reads: “Kate Farms ‘Magic Reindeer’ Made with Real Glitter 100% Oatmeal 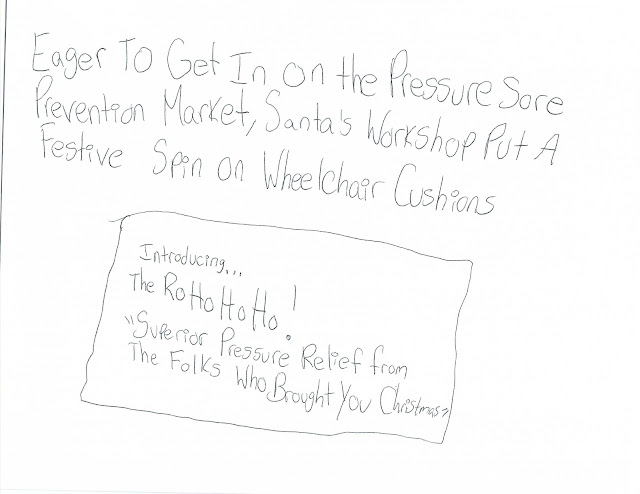 Eager to Get In On the Pressure Sore Prevention Market, Santa’s Workshop Put A Festive Spin On Wheelchair Cushions

Image: A sign that says “Introducing…the RoHoHoHo! ‘Superior Pressure Relief From the Folks Who Brought You Christmas!” 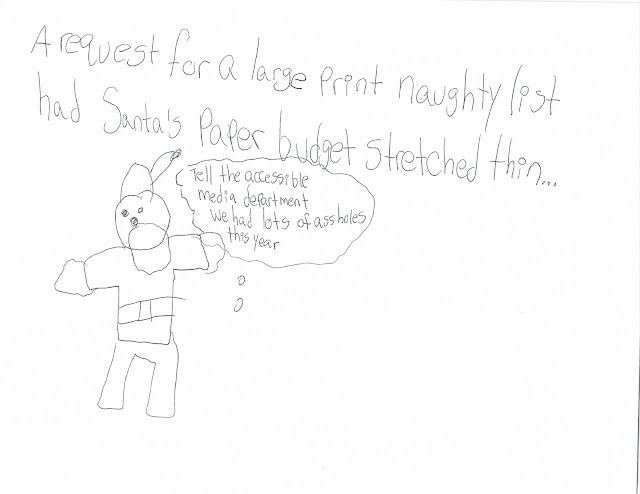 Image: A drawing of Santa saying “Tell the accessible media department we had lots of assholes this year.” 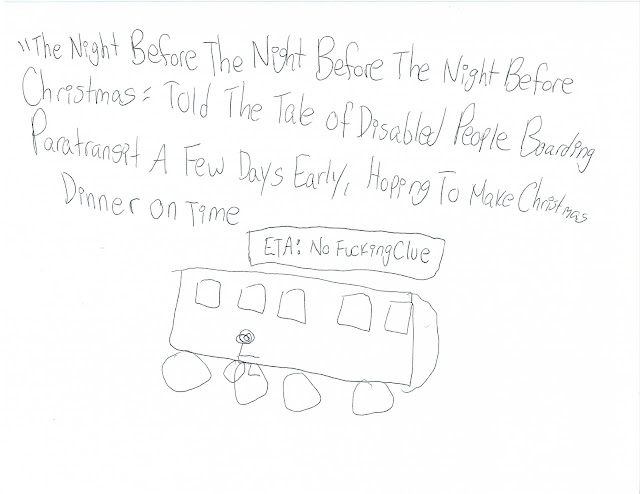 Image: A paratransit bus with the sign: “ETA: No fucking clue” 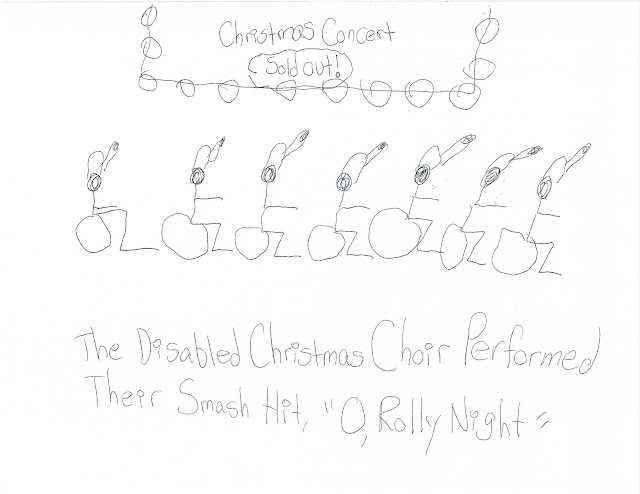 Image: A line of wheelchair users in Santa hats under a lit marquee advertising a sold out concert.

Posted by The Squeaky Wheelchair at 4:07 PM No comments: