This piece was originally written in February 2015. I am re-posting it here on my personal blog as I will be doing with all pieces that were previously only posted on the site The Mighty. The Mighty has become increasingly disrespecful toward both disabled writers and non-disabled writers who have called for changes on the site. Recent poor editorial choices have allowed for the sharing of posts that violate the dignity and privacy of people with disabilities, as well as those that promote rhetoric that characterizes us as burdens. After a disappointing lack of response from the site's administrators, I can no longer allow my pieces on The Mighty.  Just as before, this essay is dedicated to Jessica Delarosa.


It’s funny to write about this now, because so much time has passed. But at the same time, I suppose those are the acts of love that stay with you. The ones that transcend time and space, and lift you up again when you forget that in spite of all its challenges, the world can be truly good. Moments like those have no expiration date, and so I return to a simple act of kindness shown to me nearly thirteen years ago.
I was nine years old, a newbie at summer camp for kids with disabilities. I had never been away from home before, and the three weeks I would spend away from my mom and dad at the time seemed insurmountable. I didn’t make myself easy to be around that summer. I made a point to be a cranky almost fourth grader who told anyone and everyone how much I wanted to go home. Let’s say I was not a blast around the campfire.
Looking back, I wouldn’t blame anyone for being downright fed up at my insistence on being loudly, unapologetically homesick. I guess this is the part where I should mention that I had long, blonde hair that reached all the way down to my butt. On a good day, it was Rapunzel hair; on a bad day, it was tangle city. For the counselors, managing my unruly hair was just another challenge I presented that summer to go along with my less than “happy camper” mood. One day, when my hair had gone particularly nuts, everyone was feeling the stress. What to do with this child and her nearly twelve inches of crazy curls?
That’s when I met Jessica, who had decided enough was enough. Jessica was eighteen that summer, confident, surrounded by friends, and a veteran camper. She had every reason not to bother with a moody kid in a rickety purple wheelchair, much less to bother with my mess of hair. But Jessica’s magic was that instead of coming up with reasons not to bother, she went out of her way to care. With her classic tone of “never give up” determination, she pulled me aside and announced matter of factly, “We’re going to do something about that hair.” And anyone who’s ever met Jess knows that when she has a mission, she means business.
Before long, I was in the older girls’ bunk, my wheelchair parked in front of Jess’s wheelchair, having my hair braided in neat corn rows that she promised would make things so much easier. There she was, helping a little girl she barely knew, all the while telling me how pretty my hair was. As she braided, she showed me pictures from when she was a kid, and this strange new place felt a little more familiar.


I grew to love camp more than any place in the world. I grew to love Jess and call her a friend. But as long as I live, I will never forget when we were strangers, and she made the choice to be kind. To a little kid who felt alone and small, her simple good deed seemed so warm and reassuring. That little kid will be 22 this week, and still that moment brings a smile to her face. Never underestimate the power of a kind act. Just taking one moment to be gentle can show someone that when there is love, we are never far from home. 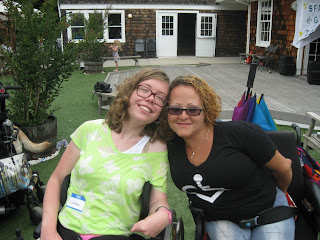 Image: 2014, me and Jessica in our wheelchairs in a grassy area at our childhood summer camp.
Posted by The Squeaky Wheelchair at 11:03 AM