It’s that time of year. 2020 was epically weird, painful, and disappointing for so many… hope I can make a few folks laugh with my Cripples at Christmas cartoons 2020 edition. 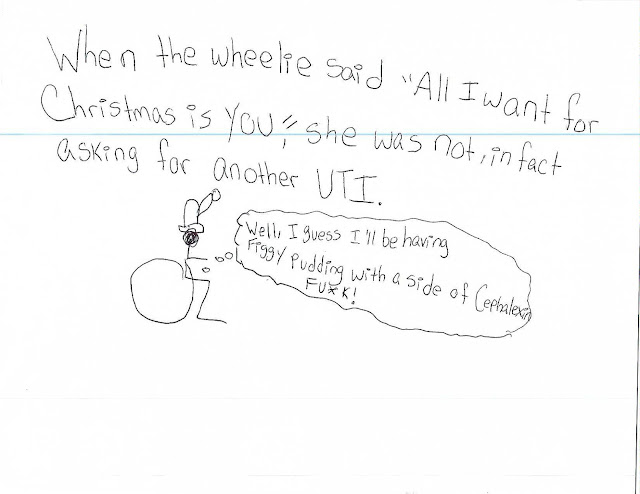 The first day of Christmas

When the wheelie said “all I want for Christmas is you,” she was not, in fact asking for another UTI.

Image of a wheelchair user in a Santa hat saying “Well, I guess I’ll be having Figgy pudding with a side of Cephalexin. Fu*k!” 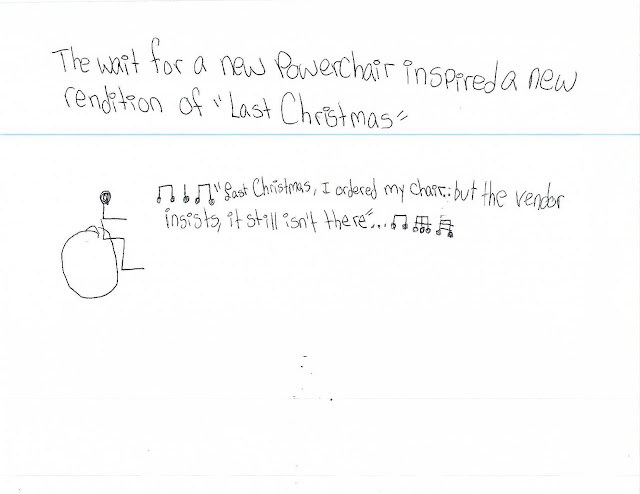 The second day of Christmas

Image of wheelchair user singing “Last Christmas, I ordered my chair… but the vendor insists, it still isn’t there… 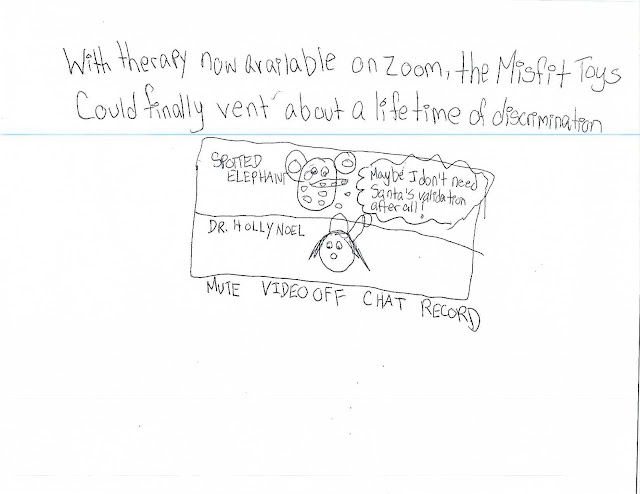 The third day of Christmas

With therapy now available on Zoom, the Misfit Toys could finally vent about a lifetime of discrimination.

Image of a split Zoom window with the spotted plush elephant from the Island of Misfit Toys and a therapist, Dr. Holly Noel. The elephant says “Maybe I don’t need Santa’s validation after all.” 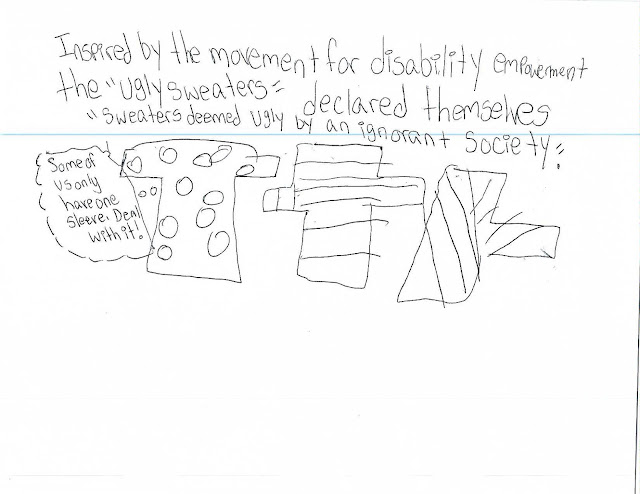 The fourth day of Christmas

Inspired by the disability empowerment movement, the “ugly sweaters” declared themselves “sweaters deemed ugly by an ignorant society.”

Image of three sweaters with polka dots and wayward stripes. One has just one sleeve. A speech bubble says “Some of us only have one sleeve. Deal with it!” 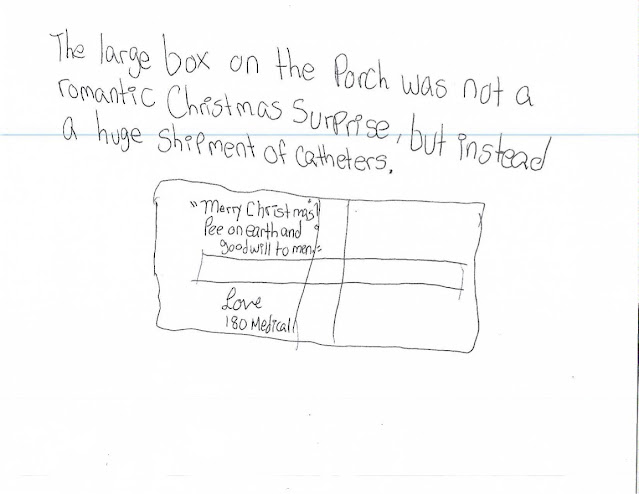 The fifth day of Christmas

The large box on the porch was not a romantic Christmas surprise, but instead a huge shipment of catheters.

Image is a box and it has the message “Merry Christmas! Pee on Earth and goodwill to men. Love, 180 Medical.” 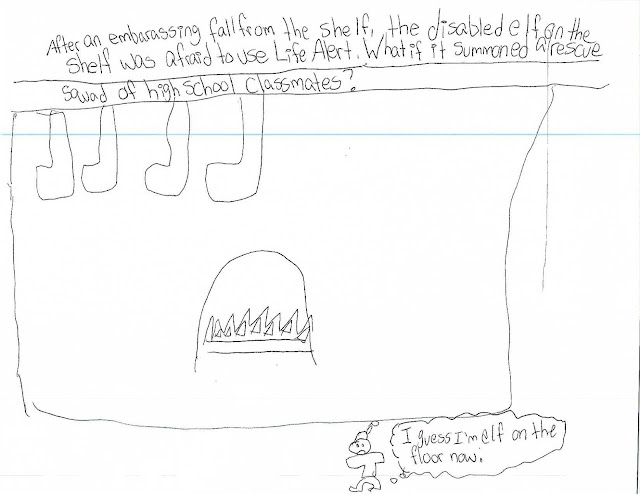 The sixth day of Christmas

After an embarrassing fall from the shelf, the disabled Elf on the Shelf was afraid to use life alert. What if it summoned a rescue squad of high school classmates?

Image is a fireplace decorated with stockings. An elf lies on the floor splayed out with a speech bubble reading “I guess I’m Elf on the Floor” now. 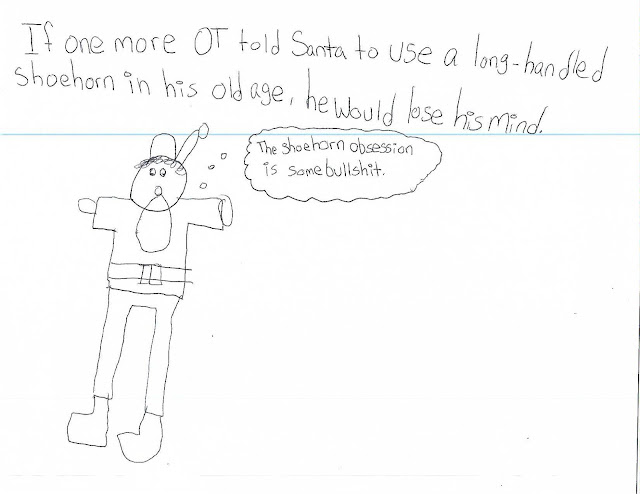 The seventh day of Christmas

If one more OT told Santa to use a long handled shoehorn in his old age, he would lose his mind.

Image is Santa saying “The shoehorn obsession is some bullshit.” 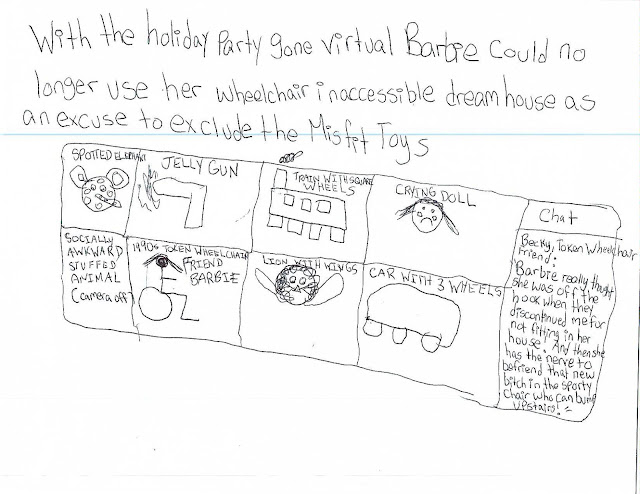 The eighth day of Christmas

With the holiday party gone virtual, Barbie could no longer use her wheelchair inaccessible dream house as an excuse to exclude the Misfit Toys.

Image is a Zoom window featuring Spotted Elephant, Jelly Gun, Train with Square Wheels, Crying Doll, Socially Awkward Stuffed Animal (camera off), 1990s Token Wheelchair Friend Barbie (Becky), Lion with Wings, and Car with 3 Wheels. The chat box has a message from Becky: “Barbie really thought she was off the hook when they discontinued me for not fitting in her house. And then she has the nerve to befriend that new bitch in the sporty chair who can bump up stairs.” 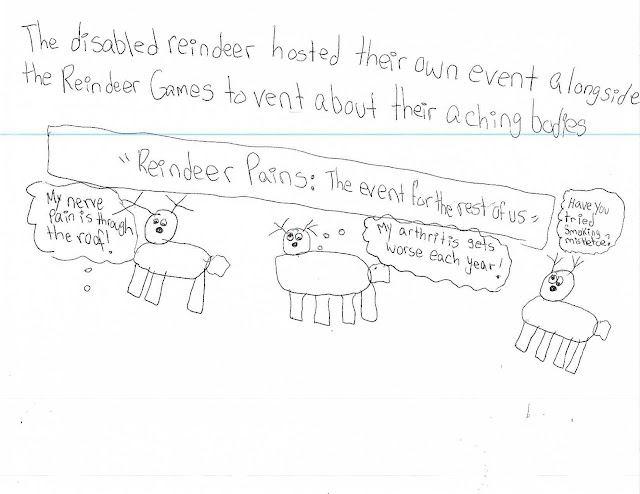 The ninth day of Christmas

The disabled reindeer hosted their own event alongside the Reindeer Games to vent about their aching bodies.

Image is three reindeer under a banner that says “Reindeer Pains: the event for the rest of us.”

Their respective speech bubbles say “My nerve pain is through the roof!”, “My arthritis gets worse each year!” and “Have you tried smoking mistletoe?” 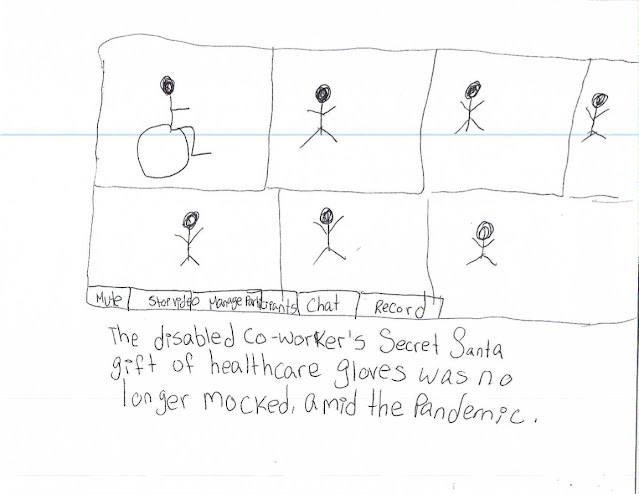 The tenth day of Christmas

The disabled co-worker’s Secret Santa gift of healthcare gloves was no longer mocked amid the pandemic.

Image is a Zoom window of a virtual holiday party, featuring a wheelchair using figure and several upright stick figures. 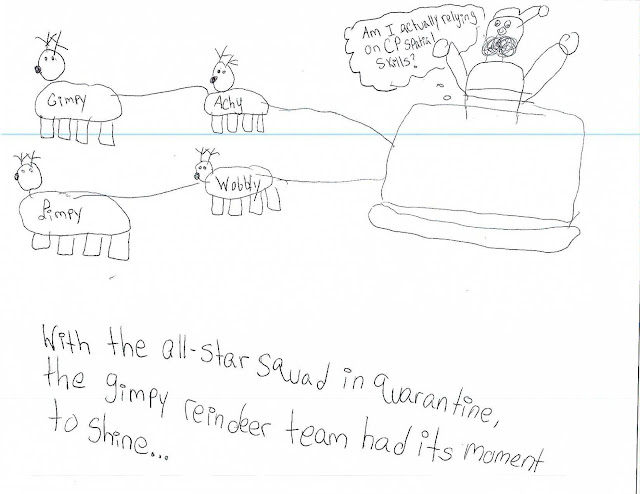 The eleventh day of Christmas

With the all-star squad in quarantine, the gimpy reindeer team had its moment to shine…

Image is Santa pulled in a sleigh with reindeer, Gimpy, Achy, Limpy, and Wobbly. Santa says “Am I actually relying on CP spatial skills?” 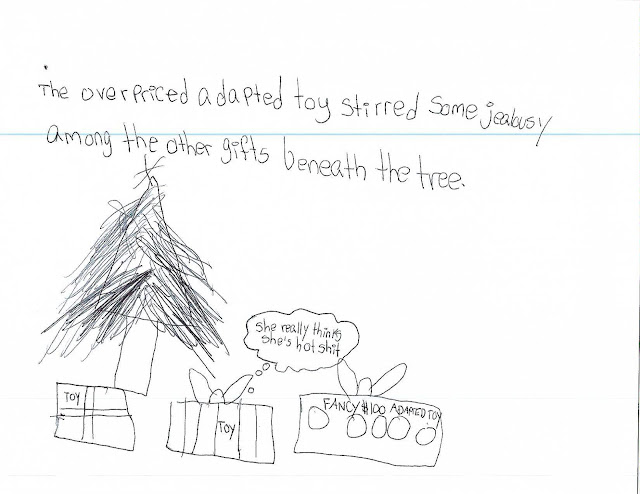 The twelfth day of Christmas

The overpriced adapted toy stirred some jealousy among the other gifts beneath the tree.