My Book Review of Laughing At My Nightmare by Shane Burcaw 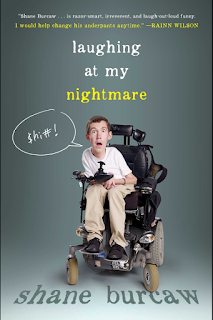 Image: Shane Burcaw's book cover, an image of him seated in a power wheelchair with a thought bubble that says "Sh#!" and the words: laughing at my nightmare.
Source: http://static.tumblr.com/8c6fc8c45ee0b26fcb3607bba3489b6f/ewwtiuo/4Nmn9lc7t/tumblr_static_83c5m3vcmcso4k8cwso0008o0.png
Posted by The Squeaky Wheelchair at 8:45 PM