An Imperfect Miracle: Tarlov Cysts, Chronic Pain, and What I've Learned So Far

When I was diagnosed with symptomatic Tarlov cysts in March of 2019, I was simultaneously terrified and relieved that my pain wasn’t imaginary. Those little uninvited hitchhikers on my sacral nerve roots explained the hellish invisible burn I experienced on the back of my thighs that made transfers, sitting on a toilet, and pulling down pants feel tremendously painful in a leg-shaking, breathtaking kind of way. Because of their proximity to essential nerves, they are notoriously challenging to treat. I am tremendously privileged to say that I was able to have cyst repair surgery with one of two surgeons in the U.S. willing to operate on them in October 2020.

It’s a long, ongoing recovery that is as much about the mind as the body.

I mentioned in previous writings that chronic pain changes you. It’s hard to trust your body to move without sending out a zap of pain lightning. Hard to let go of things you may never do again. Hard to realize that your body is an example of human fragility. Hard to reconcile a body that once moved more freely with the cautious, measured movements of your current vessel.

Growing up with cerebral palsy, my movement had always been more limited. I’m tremendously proud to have CP and in so many ways I love the way it’s sculpted my body. People with CP, I always say, have beautiful hands, with fingers that twist to the side and pulse with the energy of overexcited muscles. But CP can also sculpt the body in ways that are challenging, no matter how deep my pride. With age, cerebral palsy becomes more and more physically unkind. Arthritis creeps in. Feet turn. Hips drift and gait slows. Joint pain is a familiar visitor. Needless to say, when I also developed Tarlov cysts, I felt betrayed by the universe.

Hadn’t I already paid my disability dues? Did I win some sick game of Wheelchair of Fortune? Alas, having one disability does not exempt you from all others. That was a hard lesson to accept. And even in the midst of acceptance, I’d be lying if I said a “why me?” never creeps in.

Nearly 9 months post-surgery, I’m happy to report that I’m doing well. My nerve pain is still present, but drastically improved. The gastrointestinal issues I battled have also improved and my incision is beautifully healed.

My mind has healed more slowly. Nerve pain is unpredictable and nerves that have been surgically disturbed take a while to calm down. Waking up every morning not knowing what my pain level will be is probably the hardest part. When you have that kind of chronic pain, the brain is always on defense, screaming “Oh no! What if it’s a 10!” even though you think the 1-10 pain scale should be replaced by 1 to flame thrower on your leg. Even in places that no longer hurt as they once did, the ghosts of old pains remain imprinted in the mind, as does the anxiety that they will sneak up behind you and come to life again. It’s like the height of your pain won’t let you forget what it felt like. But the monsters in our heads scream as they’re dying, and I know that one day, I will chase out their last shudders.

Unfortunately, the S1 cyst could not be fully removed due to its location. Luckily though, it is prevented from growing and has even shrunk some. On my higher pain days, its hard not to fantasize about ripping the remaining piece of cyst out of my back and harder not to fantasize about the body I once had before this tiny cyst that no one has heard of stole so much from me. But as I’ve said before, I am in awe that my body continues to fight for me. Proud of the storms we have weathered together. I do my best to focus on how far I’ve come instead of how far there is to go. I am a human being and sometimes I fail in that effort.

I was talking to a friend recently, explaining that my remaining nerve pain goes up and down like some kind of unenjoyable log flume. There are days that are “better” and “worse” for no apparent reason and sometimes, I joke that breathing the wrong way upsets my “tenant” at the S1 nerve root. My friend said she was sorry and that she had hoped I would be pain-free, that the surgery would deliver a miracle. If I’m honest, I want that too. I want it so much it’s hard to fathom, unless you have also stood among the broken pieces of a once pain free body, digging through the wreckage for the parts of you that are survivors in the rubble.

But then I thought for a moment, and I wrote back: “I’m trying to think of it as maybe I already got my miracle. That I’m still here.”

It’s tremendously hard not to want more, not to want the magic wand version of a miracle that pops up in Disney movies.

But my conversation with that friend revealed something to me: the miracle has already been delivered and I am standing in its midst.

I am still here.

The pain ghosts didn’t snatch me in the night, though they try. I scoot to the side of my bed every morning, at times with a little boost from an anti-inflammatory and get up. I laugh a lot and my latest burst of dark humor is an idea for a spin off of Michelle Obama’s cooking show, Waffles and Mochi… a show where people eat while complaining about chronic pain called Waffles and Motrin. I am thankful to have no additional nerve damage. Gratitude is not a salve for loss, and it does not invalidate the very real pain that is unfortunately a part of being human. Pain too, deserves to be felt, without being slapped down by a “just be thankful.” But gratitude sure makes a lovely friend to keep “this sucks” in check.

I’ve learned from this odyssey that healing doesn’t always look exactly like we want it to. Healing is slow and its messy, but I can feel its presence. While shouting at the horizon line for an “As Seen on TV” miracle, I nearly missed the one that has already arrived. It’s a little more dilapidated than I pictured. A lot more. It likes super soft comfy pants that don’t provoke angry nerves.

The miracle I seek is here, imperfect but present. May my eyes be open to see it. 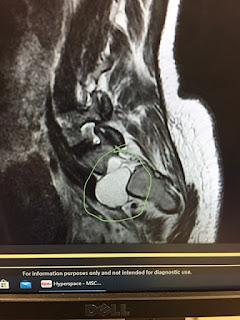 Image: MRI image of a large cyst on my spine

Posted by The Squeaky Wheelchair at 3:32 PM