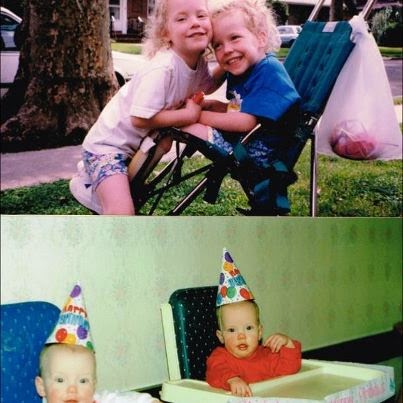 [Hey, Doc! You were right. I never walked. My CP is as severe as you said. But that's OK, because you being "right" doesn't mean that my life lost its value. Please tell other parents that it's OK if you are "right" too about things like walking and talking, because you never said it had to mean an unhappy life. And if you once thought it did, I hope you see now that you got that part wrong. Thanks for helping me. I love you.]
Image description: At the top is my sister standing in front of my green stroller, hugging me. I am seated in the stroller. We both have blonde curls and big smiles. At the bottom: My sister and I as infants in blue and green high chairs wearing party hats.
Posted by The Squeaky Wheelchair at 8:00 PM